A lean, pale, bird shaking the cinders from its wings rose from the ashes 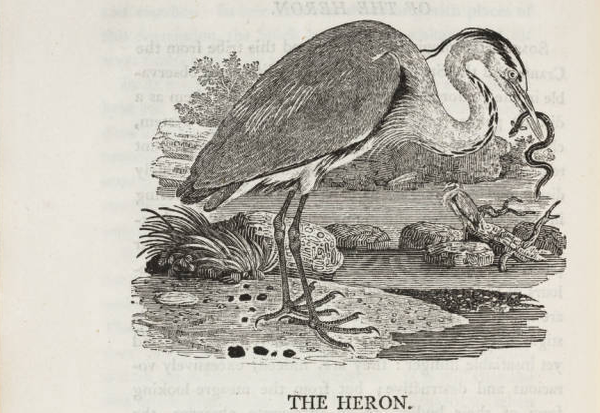 The grey heron or heronshaw

Ever since a bird rose from desolation, shaking the cinders from its wings, humans have given the bird they identify as semi-human a myriad of names.

The genus, Ardea, comes from the Latin for "heron".

In Roman mythology the town of Ardea, capital of the Rutuli, was razed to the ground, and...

From the ashes rose a lean, pale bird, shaking the cinders from its wings and uttering mournful cries

"Cinerea" is the female form of the Latin word "cinereus", meaning ash-grey, ash-coloured, derived from cinis, cineris meaning ashes (and from which the word cinders also derives).

The names you call us when we meet

People have seen the human in the grey heron since early days, and across Britain and Ireland named us with human names ranging from James, Molly, Shelia.

In Kent, we were the Hern, the Hearnshaw, the Kitty Hearn, or Kitty Hearnshrow.

In Suffolk they call us Frank, as they hear that name in our haunting cry. Frank, frank, where are you Frank?

In the Broads of Norfolk they see us as older and wiser beings. There are known as Ole Frank. Again taken from its cry.

Then the forms of handsaw including examples like Anser and hancer in Norfolk, and in Suffolk, Hahnser and hahnsey, Harnsa, Harnser.

I am but mad north-north-west. When the wind is southerly, I know a hawk from a handsaw. - Hamlet

Hornsey, is an area of London but also a named previously used for a young heron.

And now to the West

We hurtle West, where in Devon we they call us Winnard.

The Cornish make little effort, referring to us with a grunt of ‘Urn.

In Welsh the grey heron is crëyr glas.

Up and across the middle

By the time you reach the Midlands, we are Moll Hern whichhas some similarities to Molly in Ireland

In the Lake District the name jammy crane may have been used. Kathleen Morris speculates that this comes from people referring to the heron as semi-person, and given the name of James Heron

Heronsew was a popular form in the middle of Britain, including places like Durham, Yorkshire, Cumbria, Nottinghamshire, Lincolnshire and Warwickshire. Variations included heerinseugh, heerinsew, heronsue. The English Dialect Dictionary is full of variations.

Over the border into Scotland

Over the border into Scotland where we are Heron, Heroun, Herroun, Herown, and Herone. Imagine if you had so many different names. You'd stay hidden away.

Over the sea to the island of Ireland

Over the sea to Northern Ireland and we’ve become Cran, Hern, or in reference to our stature, Long-necked Hern. Some reports mention herons being called seals in Northern Ireland.

Ireland – In Irish the name is known as Máire Fhada or Long Mary, and Síle na bportach or Sheila of the Bog or Molly of the Bog. Shelia and Molly, herons again treated as if part human.

Places named for Cranes and Herons

There are some who say that place names that begin Cran- (e.g. Cranwell, Cranbrook, Cranfield, Cranmere) may be references to herons, based on the assumptiong that in the past people took little care over the differences of cranes and herons.

However Stephen Moss in his book Mrs Moreau's Warbler references Eilert Ekwall, author of Concise Oxford Dictionary of English Place-names who explains there is no reason to assume that Cran means heron, as the two names were always kept separate in the records.Cranes roamed Britain until Tudor times when they disappeared through persecution, leaving the heron to take over.

Obviously tall, thin people would be given the nickname Heron. Harnsey-gutted – lank and lean like a heron.

As lang and lanky as a herrungsue; tall and spare in body and limb.

Humans with the English surnames Earnshaw, Hernshaw, Herne, and Heron all derive from the heron, where the suffix -shaw means a wood, referring to a place where herons nested, shrieking and screaming.

It could also be a name of those who came from Harome in North Yorkshire, named from harum, plural of hær ‘rock’, ‘stone’.

The Entymology of Heron

More to enjoy:
The Herons - Awards 2020 |
The heron speaks |
Billy the Spar Heron of Aberdaron |
Prehistoric Heron |
Who are Every Heron? |
The Heron in Art 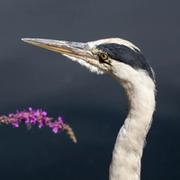